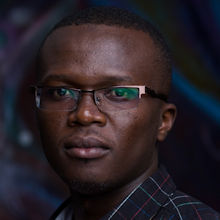 Mustafa Mahmoud is a Program Officer for Namati’s Citizenship Program. Most recently, he was the Program Manager at the Nubian Rights Forum, a Kenyan community based organisation, where he managed a team of 7 paralegals assisting the Nubian ethnic minority in applying for citizenship documents. His responsibilities included overseeing casework, managing an online paralegal case database, and advocacy efforts. Mustafa also has previous experience with a wide range of community work, including hosting radio programs such as Uhaki Radio Programme: Showcasing Politically Motivated Violence, and Uhaki Radio Programme: Re-integration of Ex-inmates, and volunteering with the Kenyan Red Cross.

Mustafa is passionate about solving injustices, enlightening communities through civic education, networking with government and civil society counterparts, and providing technical support to other NGOs starting similar paralegal projects. He is currently pursuing a degree in Development Studies at the University of Eastern Africa Baraton, Nairobi.

The Nubian community are among the earliest settlers in Kenya. Despite their presence in the country prior to it becoming an independent state - and even their participation in the struggle for independence - Nubians have faced challenges being recognised as Kenyan citizens and are often subjected to severe discriminatory procedures when applying for citizenship documents. These include specific application days, whereby Nubians can only apply on either a Tuesday or Thursday when the vetting elders are available to swear by affidavit that they are Nubians and then book them for “vetting” with the registrar, which may be as much as a three month wait. Vetting is a security process where the applicant appears before a panel that is composed of security agencies like the national intelligence, criminal investigation department and two officials from the registration department. After the process the parent is required to stamp his or her thumb print on the application form. Vetting is only practised in Kibera for Nubians and in North Eastern Kenya for the Kenyan Somali population and is does not have any legal basis. It is a process which increases the waiting period in the application for a document, because an application can only be filled after successfully going through the vetting process. There is then another long wait before obtaining a document. According to the data tracked by the Nubian Rights Forum (NRF), a community based organisation based in the heart of the Nubian settlement in Kibera, the average waiting time ranges between 154- 588 days for a case to be resolved.

In 2009, the Institute of Human Rights and Development and the Open Society Foundation filled a petition on behalf of Nubian children before the African Committee of Experts on the Rights and Welfare of the Child (ACERWC). The petition was lodged after an unsuccessful appeal to the Kenyan High court on the continued discrimination of the Nubians in 2003. The petition argued that Nubian children faced specific barriers in acquiring nationality at birth, exposing them to statelessness, due to the difficulties experienced by parents in securing a birth certificate because of arduous documentation requirements. In addition, after acquiring the birth certificate, this does not guarantee citizenship, as the document explicitly indicates that it is not a proof of citizenship and thus Nubian children must subsequently prove their citizenship at the age of eighteen through a discriminatory vetting process – not required of other citizens.

In its decision on Nubian Minors v Kenya, the ACERWC concluded that Kenya had violated the rights of Kenyan Nubian children by denying them access to a nationality at the time of birth and subjecting them, upon reaching majority, to a complicated, racially discriminatory vetting process. The ACERWC instructed the state to take all necessary legislative, administrative, and other measures in order to ensure that children of Nubian descent in Kenya, who are otherwise stateless, can acquire a Kenyan nationality and the proof of such a nationality at birth. Unfortunately, the state did little to implement this judgement.

In 2012, Open Society Justice Initiative (OSJI), Open Society Initiative for East Africa (OSIEA), Nubian Rights Forum and Namati, jointly started a citizenship paralegal project. The project aimed at assisting the Nubian ethnic minority community in applying for documents, while at the same time tracking discriminatory practices that went against the ACERWC ruling on the Nubian minor’s decision and collecting valuable data on the status of the implementation of the ruling. In 2014, OSJI, Namati and NRF submitted a report to the ACERWC on the implementation of the judgement by the Kenyan state based on the evidence they collected in their database of the clients of NRF.

The report indicated that over 60% of birth certificate applications that have been handled by the Nubian Rights Forum paralegals in the Kibera area of Nairobi involve late registration, due to the government’s failure in registering children at birth in the Nubian community. In Kenya, for one to sit for examinations both at primary and secondary level, a student is required to produce his or her birth certificate. This is also a prerequisite for joining primary school from 2013, serving as proof of age. Hence, these delays in completing birth registration can deny Nubian children equal access to socio-economic rights, such as right to education, among others. The denial and inordinate delay in the issuance of ID cards further subject the Nubian youth to poverty as they cannot even register a SIM-card, open a bank account or, worst of all, get any gainful employment. The lack of progress in the implementation of the ACERWC decision by the state is therefore a real cause for concern.