Liesl is an admitted attorney of the High Court of South Africa and the head of the Statelessness Project at Lawyers for Human Rights. She provides legal services, including litigation, to children who are stateless or at risk of statelessness in our law clinic in Johannesburg and advise legal practitioners on statelessness countrywide. She acts as the focal point for the Southern Africa branch of Citizenship Rights in Africa Initiative (CRAI) network on statelessness.


Statelessness and Nationality in South Africa.

South Africa is one of those countries where at first glance there seems to be no problem with the law as it stands. It has a progressive Constitution and the South African Citizenship Act contains certain safeguards against statelessness. It takes a closer look and constant monitoring of the interpretation and application of the legislative framework to spot the loopholes and to effectively address the needs of stateless children in South Africa. The following examples of cases in which Lawyers for Human Rights’ (LHR) has been working to find solutions offer an insight into some of the challenges faced. LHR is an independent South African human rights organisation committed to social justice activism and strategic public interest litigation. Since 2011, LHR, has been assisting stateless persons, through its Statelessness Project, with the assistance of the United Nations High Commissioner for Refugees (UNHCR). The project assists approximately 80 children annually who are at risk of statelessness in our law clinics in South Africa.

Ever since 1994, with the advent of democracy, the South African Citizenship Act has included a very important safeguard against statelessness in a provision (section 2(2)) which states that a person who is born in South Africa, who does not have the citizenship of another country and whose birth is registered, shall be a South African citizen by birth. This is often referred to as the “otherwise stateless” provision as it gives citizenship to children born on the territory who would otherwise be stateless. In Africa, only 13 countries specifically provide for such a provision in their nationality laws. It is tempting, therefore, to approve of South Africa’s attempts at addressing statelessness and move on to other issues. However, in the 20 years since the provision has been in place, it has never been implemented to protect stateless children born in South Africa.

LHR client, Daniella, was born in Cape Town. Her mother and father thought that she would automatically be Cuban because they are Cuban. However, the Cuban embassy would not recognise Daniella as a citizen, because she was not born in Cuba. A child generally acquires South Africa citizenship when they have a parent who is South African. As Daniella does not, she was born stateless.

“Nobody has to do illegal things. You just have to go to the Minister and the Minister has to sign the certificate. It’s in the law”.

The problem is that it is not possible for stateless children to apply for citizenship using this provision, because there is no regulation to provide a form to fill out at the local office. There are no guiding principles on determining whether a child is stateless in the Act. Additionally, even though the section was in the law, the Department of Home Affairs had resolved not to implement the section as it was concerned that ‘too many children would apply for citizenship’.

On 6 September 2016, LHR obtained an order in the Supreme Court of Appeal of South Africa, which declares Daniella to be a South Africa citizen by birth and which compels the state to issue her with a South African citizen birth certificate immediately. The court went further than only assisting Daniella. The order compels the Department of Home Affairs to make regulations to facilitate the implementation of section 2(2) by March 2018 so that other stateless children may apply for citizenship. 20 years and a two court orders later, the provision is finally implemented. However, LHR’s work is not done yet. We now have to make sure that the court order is implemented and that other stateless children are afforded access to the provision pending the drafting of the regulations. Even after the regulations are in place, LHR will need to monitor the constitutional validity of the regulation and its consistent and correct application to children who are indeed stateless.

Learn more about Daniella in the short film “Belonging, Part 2”

Social workers found Manny in the care of a Portuguese speaking woman who was not his mother and who was neglecting him. He was two years old when he was removed from her care by the Department of Social Development. Since then, there has been no sign of the woman who he was found with. He had no documents and was too young to remember any of the details of where he was born or who his parents were. He may or may not have been born in South Africa and/or to South African parents. Manny has been living at a children’s home in Cape Town his whole life. He remains unregistered, because the Department of Home Affairs believe he is foreign as he was found with a seemingly foreign woman. Manny is now 17 and will soon be regarded as an adult. Manny only knows South Africa and is terrified at the idea of being considered an illegal foreigner once he turns 18. He may be subject to arrest and deportation to a country where he holds no citizenship. Manny is a bright young boy who wants to study and make a life for himself, but his future is unclear and he cannot make plans to be successful, because he is undocumented and stateless.

Section 12 of South Africa’s Births and Deaths Registration Act requires the registration of children who are abandoned or orphaned and have not been registered before. However, it is currently only applied to young babies and it requires the Department of Home affairs to register children as foreigners when they are “clearly foreign”. The Department thinks that Manny is Angolan, because he had a Portuguese speaking caretaker when he was 2 years old. However, there is no proof to that effect and the Angolan embassy has confirmed that he is not considered as such. Manny is therefore stateless.

In order to ensure that foundlings are not exposed to statelessness, the Act should be amended to specifically include foundlings. These are children whose parentage is unknown, regardless of their age. As supported by the Committee and Article 7 CRC, foundlings should be registered and recognised as South African citizens in terms of section 2(2) of the Citizenship Act which gives citizenship to stateless children.

In addition to the need for a change in the law on foundlings in order to prevent statelessness, we will also need to monitor the application of these laws to foundlings in order to ensure that the state’s practice evolves in line with international law and human rights. Providing citizenship to children found on the territory is an important safeguard against statelessness.

Caleb was born in the DRC. His father fled the DRC as a refugee and settled in South Africa with Caleb, where he claimed refugee status. Before his father obtained refugee status in South Africa, he passed away, leaving Caleb undocumented and unaccompanied. Caleb was placed in a child and youth care centre where he has been living ever since his father’s death. Caleb has no individual refugee claim. He was very young when he came to South Africa with his father. He does not remember the DRC at all. He cannot establish a claim to nationality in the DRC and cannot be returned there, because he has no known relatives there. The Children’s Court has placed him in the care of a South African foster home, but neither the SA Citizenship Act, nor the Immigration Act makes provision for a legal status for someone like him. He is stateless in South Africa.

Caleb’s only hope of obtaining legal status and documentation is through section 31(2)(b) of the Immigration Act, under which he relies upon the Minister’s discretion. This status is not widely applied and will only give Caleb permanent residence and not citizenship. He may be able to apply for citizenship after 5 years of having permanent residence, but until then he will remain stateless.

In order to protect children like Caleb from statelessness, we need to address the current gap in the law which allows particularly vulnerable children who are stateless or at risk of statelessness, to reach adulthood without having accessed South African nationality. In particular, we need to make provision for an immigration status and an identifying document for unaccompanied or separated migrant children in order to facilitate naturalisation. This is in line with the African Committee of Experts’ General Comment No.6 (2005) on the treatment of unaccompanied and separated children outside their country of origin. The Committee recommends that state parties provide birth registration and access to basic rights, such as health and education, to all stateless children and their families, on a state party’s territory, irrespective of their legal status. This may be a first step in the possibility to acquire a nationality for children in such circumstances. In accordance with Article 7, the Committee has urged the States Parties to ensure the implementation of the right of all children to acquire a nationality, as far as possible, in order to prevent statelessness.

LHR is engaging with government departments on various levels in order to convince the state that there is a need to regularise these children and to create a safeguard in the law which will give these children citizenship when they turn 18 if they are stateless. We are employing several advocacy strategies and may also use strategic litigation if applications for group exemptions for status fail. 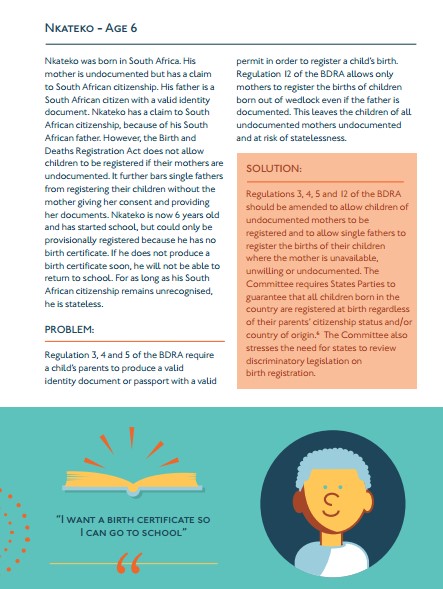 In 2016, Lawyers for Human Rights, in collaboration with the Institute on Statelessness and Inclusion, published a short booklet to share the stories of stateless children in South Africa and explain what law and policy reforms are needed to fulfil their right to acquire a nationality. The publication made the issue so accessible and was suitable for such a wide range of audiences that 20,000 copies were printed for circulation in South Africa within a year after its release. The booklet can be found here: