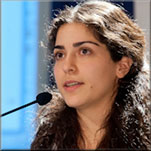 Zahra Albarazi is a co-founder and senior researcher at the Institute on Statelessness and Inclusion. She holds an LLM in International Law from the University of Leeds, UK and is enrolled as a PhD researcher at Tilburg Law School. Her work has mostly focused on the understanding of statelessness and nationality in the Middle East and Africa region and the interlink between discrimination and statelessness. During 2016, Zahra conducted desk-based and field research to better understand the interaction between statelessness and displacement prompted by the conflict in Syria, for a joint project of the Institute and the Norwegian Refugee Council. This short essay draws from the findings of and tools developed under this project.


Albarazi, “Our Motherland, Our Country. Gender Discrimination and Statelessness in the Middle East and North Africa” Women’s Refugee Commission and Tilburg University, 2013.

UNHCR, “In search of solutions: Addressing statelessness in the Middle East and North Africa” 2016.

Civil war broke out in Syria in 2011 which has led to a humanitarian disaster of immense proportions, both inside Syria and beyond. With the crisis came mass displacement, internally and across international borders. As many as 4.8 million refugees are registered in neighbouring countries and over a million have travelled to Europe. Over 300,000 children have been born to Syrian refugee parents in exile since the start of the conflict. 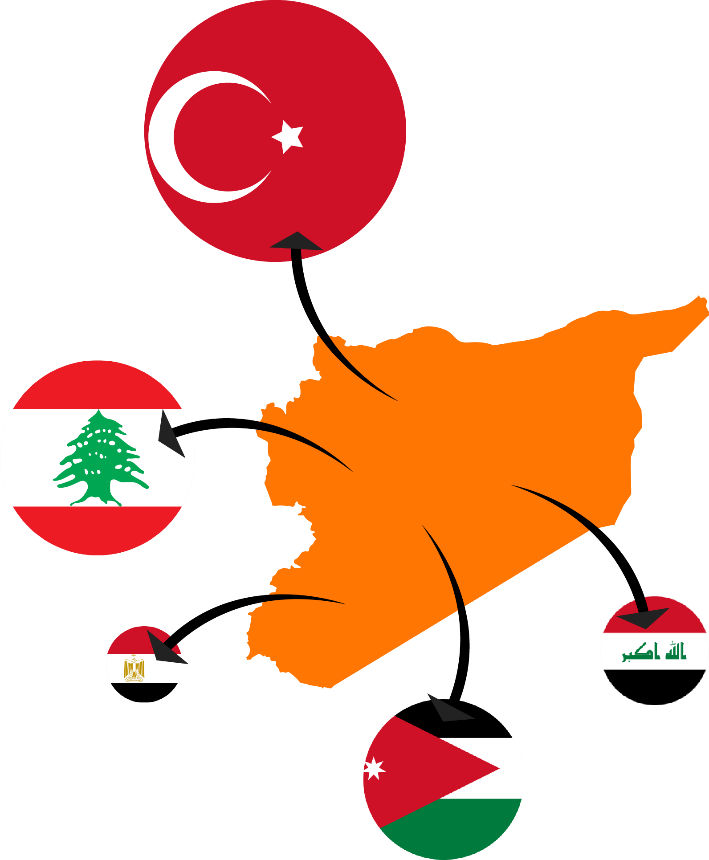 As a response to this and the increasing awareness as to what this mass displacement may be doing in terms of increasing statelessness, in 2016, a research project was carried out, leading to the report entitled Understanding Statelessness in the Syria Refugee Context. This project was a collaboration between the Institute on Statelessness and Inclusion, as statelessness experts, and the Norwegian Refugee Council as displacement experts. Through field research in Jordan, Kurdistan Region of Iraq and Lebanon, and desk research in Egypt and Turkey, the report analysed some of the most significant problems that face displaced persons from Syria in putting them at risk of statelessness, as well as pinpointed some of the obstacles that stateless refugees may face.

There are several issues – including flawed legislation and practice – emerging inside Syria that are contributing to the risk of statelessness among children. These include:

Nationality law: Firstly and most importantly, Syria’s nationality law is predominantly based on paternal jus sanguinis, which means that a child will become Syrian only if they have a Syrian father. Birth to a Syrian mother does not automatically confer nationality, and although there are criteria

under which a Syrian woman may be able to transmit her nationality – such as when the father is unknown – this is rarely implemented. If born abroad, a child will only be Syrian if his or her father is Syrian. In the situation of displacement, there are many circumstances in which it cannot be established who the father is - such as where there is no marriage registration or if the father is unknown, dead or missing. Therefore discrimination in Syrian nationality law heightens the risk of statelessness among children in this displacement. 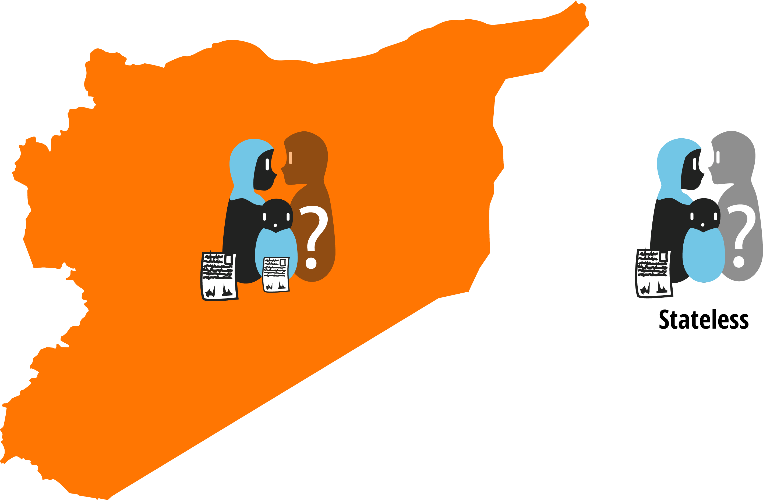 Customary practices: There are customary practices that take place in Syria that have become problematic in the displacement context. One, for example, is the practise of couples marrying according to Islamic tradition and delaying the registration of their marriage with the state authorities until necessary. In Syria, this was not a problematic practise. However, in neighbouring countries there are strict regulations that marriages should be registered immediately or penalties will apply. Therefore, when refugees in neighbouring countries are not aware of this and continue the practise they are used to, they may face problems in getting their marriage recognized. In these same countries, where a marriage certificate is a pre-requirement to registering births, this can make access birth registration and establishment of nationality for new born children difficult.

Hereditary statelessness: Childhood statelessness is not a new phenomenon in Syria. The country already hosted a significant stateless population, which included for example hundreds of thousands of stateless Kurds. When a child is born to a stateless father in Syria, they themselves will be stateless. Therefore, there are many stateless children who have now also become refugees, as well as stateless refugees who are passing on this status to children born in exile.

When the only route to a Syrian nationality for a child born in exile is through having a Syrian father, registering the birth of your child – which will contain details of who the father is - may be essential to establishing that nationality. However, the conflict has created several obstacles to accessing birth registration:

Birth Registration in Syria: Due to the conflict, there are many children who have been born in Syria in the last five years who have not been able to get their birth registered. This may be for several reasons, including because they live in an area of active conflict making access the authorities hazardous, because the local civil registry has been destroyed, or because they live outside regime controlled areas and there is yet to be a system of birth registration, or the system administered by non-state actors is seen as not legitimate. A particular difficulty when an unregistered child becomes a refugee is that they may then never be able to have their birth registered in Syria, and the refugee-hosting country is not responsible for registering a birth that did not take place on its soil.

Birth Registration in neighbouring host countries: For children who are born in neighbouring countries, there are other obstacles that may be preventing them from having their birth registered. With civil registration systems that differ significantly throughout the region, the parent(s) may not be aware of what the registration process is. This is especially true as the procedure may be particularly complex, sometimes comprising as many as five separate steps. More problematically, a whole array of documents may be required to be able to access the civil registration process. Even when they are aware of the process, refugees may not even be able to access it due to the type of documents that are demanded, which can include for example marriage certificates, ID cards, legal residency documents, etc. Many refugee children are therefore left unregistered. Statistics vary, but, for example all statistics in Lebanon show that more than three quarters of refugee children to not fulfil the birth registration system.

4. Children at heightened risk of statelessness

Due to the vulnerabilities that the crisis has put families in, there are certain families where children are at heightened risk of statelessness because of their displacement:

Female-headed households: UNHCR statistics have stated that a quarter of refugee households are now female headed, where the husband and father is no longer present. If the mother had been pregnant, there may be some of these families who have no legal proof as to who the father was. If there is no legal proof to a marriage and the father is not physically present, this will put serious strain on showing that a child has links to Syria and thereby Syrian nationality.

Children born within early/child marriages: Unfortunately one of the consequences of the crisis is that there has been a sharp rise in the number of Syrian girls who are married before the minimum age – often a coping mechanism adopted by refugee families for a variety of reasons. In many of the neighbouring countries that host significant numbers of refugees, early marriage is prohibited and there may be punitive consequences. Therefore, these marriages are often never registered and remain under the radar. A girl who has a child within an early marriage, will very often not be able to register that child’s birth, and there will be no formal recognition as to who the father is.

5. A toolkit for strengthening engagement

To complement and “activate” the knowledge compiled in the research report, an online toolkit was developed. It includes a collection of information and resources that aim to help practitioners in the field to easily find answers to questions about statelessness in the Syria refugee context. It provides easy-to-digest material about relevant concepts, laws and procedures, using infographics to help visualise complex processes, such as this 5-step birth registration procedure in Lebanon: 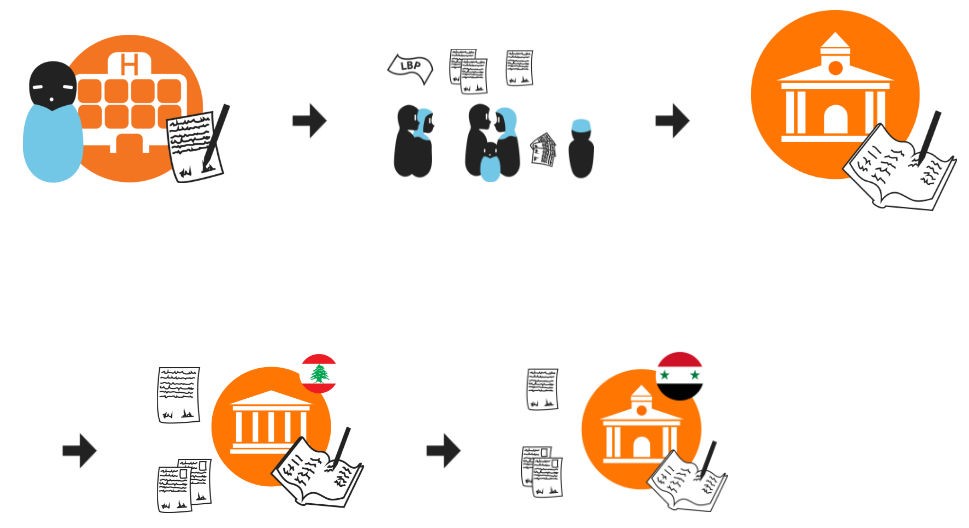 Wherever possible, the toolkit emphasises practical steps that can be taken to mitigate risks. It is designed to be of use to humanitarian staff who engage in a regular basis with refugees facing challenges to access civil registration and other important procedures for preventing statelessness and alleviating the plight of statelessness refugees. The information and resources offered can also be useful to a wide range of other actors, including government officials responsible for improving civil registration systems, UN staff working on programmes and policies or front-line humanitarian actors providing various forms of direct assistance to refugees. The toolkit is relevant both to practitioners working in the region and to those working with Syrian refugees around the world.

The toolkit can be found at www.syrianationality.org. It includes a Resource Library, which contains a selection of project videos and downloads, as well as links to related reading material online.

1 Full details and information sources are available in the research report.