Development of Human Resources for Rural Areas (DHRRA) Malaysia is a non-governmental organisation working towards the social protection of Malaysian communities. DHRRA’s mission is to enhance self-awareness and equip living skills among vulnerable communities for them to become self-reliant and empowered to take charge of their lives.

The struggle for documentation: A family story

Mageswari (19), Manisha (14), and Sanjay (11) are siblings who, despite having been born in Malaysia, do not possess birth certificates and were at the risk of becoming stateless. Their mother, Saraswati d/o Murugesu (49) is illiterate and claims to have been unaware of birth registration procedures. Her husband has left the family.

When DHRRA Malaysia spoke to Saraswati recently, she said with remorse:

I only went to primary school for three years, and I am quite illiterate. I do not know much about the government requirements, and even if I did, I would not be able to fill out the relevant forms in English or Bahasa Malaysia [the national language].

Mageswari, the oldest child, studied until the age of 14 before dropping out of school to help her mother support the family financially. As she had no proper education or documentation, most employers were reluctant to give her a job. She says:

I was underage and no one was willing to offer me any job. but I had to work, because I really wanted to take some of the burden off my mother’s shoulders. I really want to study. Many nights, I cried alone thinking of the future that I would not be able to achieve because I left school. I really wish there was some other way, but without a birth certificate, I cannot even dream of a future. I was completely in the dark, but I never quit praying or hoping, because I want my siblings to have a bright future.

I felt like an alien. Friends would make fun of me because I did not have a birth certificate. I often asked my mother about this but all she can do is cry helplessly. So, I stopped asking. I was lucky enough to have been allowed to sit for UPSR without a birth certificate. But once I turned 12, I could not apply for an identity card. I became the target of bullying in school. I often feel so helpless. There seems to be no future at all for myself and my siblings.

As for Sanjay, he had to skip Standard 1 at the age of seven due to his undocumented status. Luckily, his school allowed him to enrol in Standard 2 the following year. Sanjay is now in Standard 5 and has received praise from his teachers for his good academic performance. His expression brightens when he talks about school:

My teachers say that I am very clever, but they are concerned that I may not be able to go far because I do not have a birth certificate. I don’t understand what they are talking about. I asked my mother but she hasn’t given me an answer. I’ve asked my sisters but they only tell me to never lose hope. 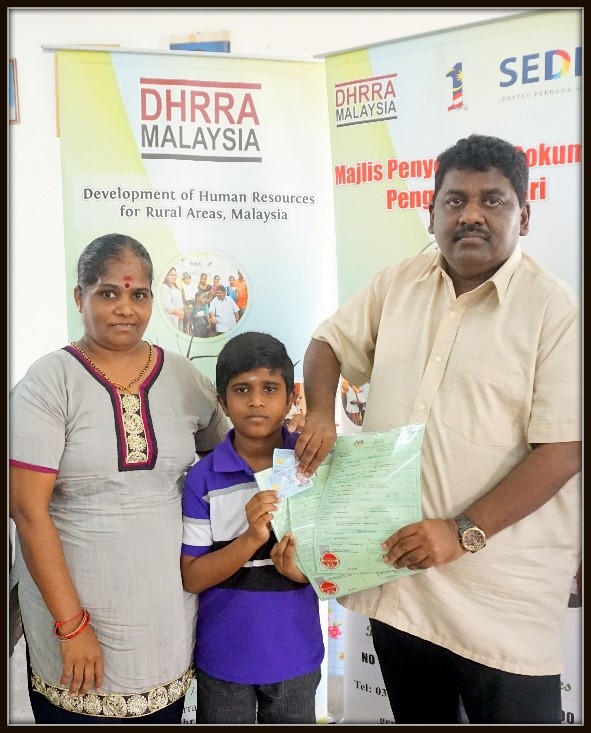 Mageswari, Manisha and Sanjay are just three of the many Malaysians of Indian descent whose childhoods have been compromised due to their legal status. Luckily, their story has a happy resolution: Saraswati’s concern for her children were put to rest after DHRRA Malaysia succeeded in assisting her in securing birth certificates for them. She rejoiced, hugging her children: “I have never imagined that this could happen. My prayers were finally answered. I am speechless”.

Today, Manisha, newly empowered with her papers, is looking forward to sitting for her PT3, while Sanjay is hoping to get good results in his UPSR next year. He says, “I want to study hard, and then start working to take good care of mum”.

As for Mageswari, she is glad that her siblings do not need to drop out of school. While she has no plans to go back to school, her life has changed for the better after having secured her Malaysian legal identity. Now, she qualifies for the Employees Provident Fund (EPF) and Social Security Protection (SOCSO) in her workplace.