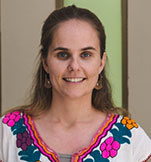 Macarena Rodriguez is a Chilean lawyer and LLM in International Human Rights Law at University of Notre Dame. Currently she is the director of the Immigrants Legal Clinic at Alberto Hurtado´s University.

Delfina Lawson is an Argentine lawyer, and currently she is the Director of the Legal Clinic for Migrants and Refugees of the Diego Portales University. She is a member of the Steering Committee of the Americas Network on Nationality and Statelessness.

Website: Center for Hyman Rights of the Diego Portales University

Estela visited a Legal Clinic in the city of Calama (in the north of Chile) in June 2016. Her sister, Dayana was at risk of statelessness. As a result of the project conducted by the Legal Clinics and National Institute on Human Rights, in September 2016, Dayana was recognised as a Chilean national.

Good morning, could you please tell us your name?
Hi, my name is Estela.

Estela, what brings you here today?
I am here because my ten-year-old sister (Dayana) has had many difficulties in obtaining her Chilean document.

Where was your sister born?
She was born here in Calama.

So that means that your mother had been living here for more than ten years, and nevertheless, your sister was registered as a 'Child of an in transit alien' (CITA)…
Yes.

What problems did your sister face for being registered as a CITA?
On many occasions, we went to the Civil Registry to obtain my sister´s ID, but they always told us that she could not obtain her documents because she was a CITA.

So that means that the only document your sister has at present –as a ten year old- is a birth certificate?
Yes, she does not have any other identification document.

What other obstacles has your sister faced?
My sister was born at the hospital, but after that that whenever she had to go to the doctor, my mother had to pay for the health services, going to private doctors because she has no Chilean document. She has also faced problems when going to school. Many schools did not accept her because she does not have her Chilean document.

Have you tried going to the government offices for some help?
Yes, but after ten years of trying, we have lost hope.