Nicole Garbin is a qualified Italian lawyer currently working with the European Roma Rights Centre in Budapest, Hungary. She graduated from the Trieste University (Italy) and has an LLM in French Private Law (Paris 2 Panthéon Assas). Adam Weiss is ERRC’s Managing Director. His major professional interests are strategic litigation, non-profit management, and professional activism. Adam has been involved in the litigation of a wide range of cases before the European Court of Human Rights, as well as cases before domestic courts and the Court of Justice of the European Union.


“Strategic Litigation at the European Roma Rights Centre”, May 2015

Nicole Garbin (Chef de Cuisine) and Adam Weiss (Executive Chef)
*Disclaimer: this contribution was originally published as a blog by the European Network on Statelessness. 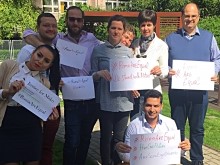 15,000 Roma children.  That’s the number of Roma children in Italy who are stateless or at risk of statelessness. Despite being born in Italy to families often in Italy for several generations, these children are not only without Italian nationality, but they also have no residence permit or any identity document.  According to Italian law, these children do not acquire Italian nationality at birth.  You can find them all over Italy.

A handful of countries in South East Europe.  Most of these children’s families come from the former Yugoslavia. Many of them do not acquire any other nationality because of the complexity of the procedures in those new countries, or because the parents themselves are not citizens of them.

A heaping bowlful of messy Italian legislation.  The technicalities of the Italian legislation play a major role in leaving Roma children in this situation.  Under Law 91/92, "A foreigner born in Italy, who has resided legally without interruption until reaching the age of majority, becomes a citizen if (s)he elects to acquire Italian citizenship within one year of reaching that age".  Keep an eye on that phrase 'resided legally'.  In 2013, a new provision (art. 33, Decree 69/2013) came into force which states that children cannot suffer from failures attributable to their parents or the public administration.

Take just one of those 15,000 children.  Emina, for example, a Romani woman born in Turin (Torino) who has lived in Italy since her birth.  Her family originally comes from Bosnia.  She was taken into care at the age of eight along with her sister.   When she turns 18 (as she did back in 2012), help her apply for 'election of citizenship' under Law 91/92.  Emina could prove she lived continuously in Italy since her birth.  She sent the authorities school and scout group attendance certificates, social worker statements, and her vaccination record.  But the authorities didn’t like something in the sauce: she was turned down, on the basis that she only secured a residence permit when she was fourteen, which meant that she was not 'legally resident' since birth.

In 2013, ask the authorities to apply the new legislation on children retroactively.  Don’t be surprised if they refuse; that’s what they did here.

Repeat over, and over, and over again for the many Roma in this position who apply for Italian citizenship (and don’t forget about the many, many others who won’t even bother).

Then – and don’t forget about this part – take the bureaucrats to court.  And pepper your lawsuit with lots of language about the rights of the child, EU law, international conventions, and Italy’s obligations to reduce statelessness.  With the support of the ERRC and a local lawyer, that’s what Emina did.

Wait a few months.  (Or, in Italy, maybe a few years.)  And then, if you’re lucky, you get a judgment like Emina got on 22 January 2016.  The judgment is a big deal in our efforts to end Roma statelessness.  The court found that the authorities were too strict by making 'legal residence' conditional on two requirements: uninterrupted registered residence and the continuous possession of a residence permit.  The court invoked international principles stemming from, among others, the Hague Convention on the Civil Aspects of International Child Abduction, EU law, the European Convention on the Exercise of Children's Rights, the Charter of Fundamental Rights of the EU, as well as case law of the Court of Justice of the European Union.  Moreover, the court stated that a 'constitutionally oriented' interpretation of the 2013 rule protecting children should apply retroactively to this case.

The decision represents an achievement in the Italian legal system and an example to be followed elsewhere. This judgment can and should be invoked before reluctant local authorities refusing to acknowledge that Roma in this situation have Italian nationality.  It provides a clear precedent for the retroactive application of a provision protecting children from statelessness.

It is a taste of justice based on a new Italian recipe that, like the country’s cuisine, should be imitated and enjoyed everywhere.